Learning the Origins of Sushi

Sushi has become a world renowned Japanese cuisine over the past years and it has integrated many foreign influences over time. The sushi recipes that are available today have become an entirely new cuisine as it has evolved through the years. However, the Edomae sushi or the Edo (Tokyo) style sushi is the original sushi recipe and this has remained a favorite among the Japanese people as well as those who love the Japanese cuisine. This is a plain sushi that the world knows. This is a combination of vinegar flavored rice and Japanese sashimi. 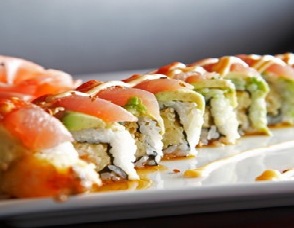 The Evolution of Sushi

Originally, the term sushi refers to fermented meat or perhaps fish which was then prepared for the purpose of preservation.  Many people often confuse sushi as simply raw fish and rice when in fact it is not. It is believed that sushi has its roots in Southeast Asia where fish and other meat are salted and fermented for long periods of time. Chinese scriptures of the 2nd century have shown evidences on similar methods of fermenting fish and meat. Moreover, it seems that this has once become the most popular dish at that certain period in time.

In the 7th century, the same type of sushi has been documented in Japan. During the 10th century, it has been noted that uncooked rice was stuffed inside the fish after the fish has been gutted. After this, the fish is then cleaned with the use of sake or Japanese rice wine before the fish is fermented. For this type of sushi, a carp is often used and this is called the ‘nare’ sushi or ripe sushi.

The rice placed inside the fish helps with the fermentation process and this makes it quicker to prepare compared to the original sushi. Once the fermentation completes after 2 to 3 months, the rice is discarded and the fish is the only thing that is consumed.

During the 15th century, the nare sushi was then categorized into two which are the hon nare or true ripe and nama nare or raw ripe. The hon nare is the original version of the nare sushi which was then developed in the 10th century while the nama nare is the same sushi type yet this is consumed prematurely. For this type of sushi, the rice stuffed inside the fish has become edible and this has a mild tangy flavor. After several years, vinegar was then added to the preparation process. This makes the preparation significantly shorter compared to the previous process of making sushi.

The vinegar was added to artificially create the tangy taste that the fermentation process brings. From this time, less and less fermentation was then required to make the nare sushi. Eventually, new type of sushi began to emerge using only cooked rice and fresh vinegar. This has become a trend of the new sushi style in varied localities. Some of the new sushi delicacies during this time are the Osaka style sushi, nuku sushi, chirashi sushi and Oshi sushi.

It was only in the year 1827 that sashimi or slices of raw fish and sushi were combined. This was known as the Edo style sushi. This is the sushi type that is very popular in the world today. The vinegar rice which resembles the naturally fermented sushi rice has helped in keeping the sashimi from spoiling too quickly.

The history of sushi is very colorful and interesting. You can definitely picture out how sushi evolved through time. The sushi cuisine has also touched the lives of many people of foreign lands as it continue to influence and show the world a Japanese delicacy which is one intricate and delicious cuisine. Moreover, you can also see that there are now variations in sushi that caters to the unique needs of different kinds of people.

Types of Sushi Patterned After the Edo Style Sushi

During the time that the fermented nare sushi was replaced by the sushi rice that requires less fuzz over its preparation, many types of sushi has emerged through Japan. These types of sushi have one common factor which is the use of sushi rice. However, these sushi types differ in their shapes and sizes. One the other hand, these emerging sushi types are different from the Edo style as they mostly make use of cooked or cured ingredients.

These are the Futomaki, Hakozushi and the Nuku Sushi. The Futomaki or thick roll sushi makes use of a variety of cooked ingredients. On the other hand, the Hakozushi or Box sushi is the type of sushi that is pressed in a box. The ingredients for this type of sushi are placed on top usually a cured mackerel. The Nuku sushi is a steamed type of sushi. Sushi rice as well as its ingredients are packed in dried bamboo leaves and steamed.

Another type of sushi is the Kyoto sushi. Kyoto is a place in Japan where fresh fish is not readily available. For this type of sushi, the fish that are used are cured fish. Since Kyoto is also known for its unique vegetables, the vegetables are often flavored through simmering and these are used as ingredients. Saba sushi is composed of cured mackerel and sushi rice and is formed through the use of an oval pole and wrapped in kelp.

After this, they are cut in individual pieces. Hamo sushi is a sushi composed of grilled pike conger and sushi rice. This is garnished with sweet soy sauce. Lastly, the Temari sushi is a type of sushi formed into a ball. All the ingredients are cooked or cured.

Undoubtedly each and every parents love their children and they...

To be healthy and fit, people would like to get...

The Three Healthiest Things You Can Eat

For years, losing weight has been about sacrifice. We’ve been...